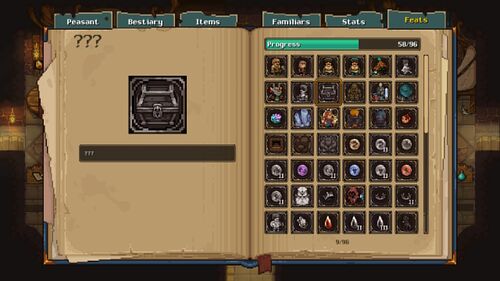 Feats are a tab of the Journal that is keeps track of Achievements on the Nintendo Switch.

This system works similarly to the achievements on other platforms and acts as a global achievement and will display that the same achievements have been unlocked between different saves. This allows achievements like "Its a secret to everyone" to be completed on a separate new save if its missed on the main save.

The left side of the Feats tab displays the achievement name, image, and unlock requirement.

The right side lists all of the achievements, and the overall achievement progress.

Retrieved from "https://undermine.wiki.gg/wiki/Feats?oldid=35690"
Category:
Cookies help us deliver our services. By using our services, you agree to our use of cookies.